A new challenge over at the Simon Says Stamp Challenge Blog: Die Cuts or Punches!

Here is the card I made:

This card is not really my usual style.  This is actually an acetate card, but I added some patterned paper and some whitewash on the backside so that it’s not clear anymore.  I always struggle with using patterned paper, but I can’t stop buying them because they are so pretty. xP So this was my attempt at using some patterned paper.

I took an acetate card and used a Nestability die (Lacey Circles) to make a window. On the inside of the card, I stamped a Stamping Bella stamp (Mismatch Ketto) using black Stazon Ink.  Then I flipped the acetate and colored the image from the backside, using Sharpies and Bic Mark-Its (a technique learned a long time ago from Jennifer Mcguire).  I then took some white wash spray that I made (using white acrylic paint and some white ink) and sprayed the backside.  I used a fan brush to even out the whitewash to create the white background so that the image pops more, but the card is still a bit opaque.  I used some patterned paper (hmm, not sure which pack as it was a scrap piece in my drawer) and glued it to the front side of the acetate card.  I matched up the die-cut window and used the same Nestability die to cut out the center of the patterned paper.  I flipped over the die cut patterned paper, sprayed it with some homemade purple glitter spray (some Jacquard PearlEx and Jacquard NeoOpaque paint mixed with water) and glued it on the inside.  I added some flowers as embellishments. The sentiment is from an Ali Edwards stamp set (Loving Words), which I embossed with pearlescent blue embossing powder.

Here is a closeup: 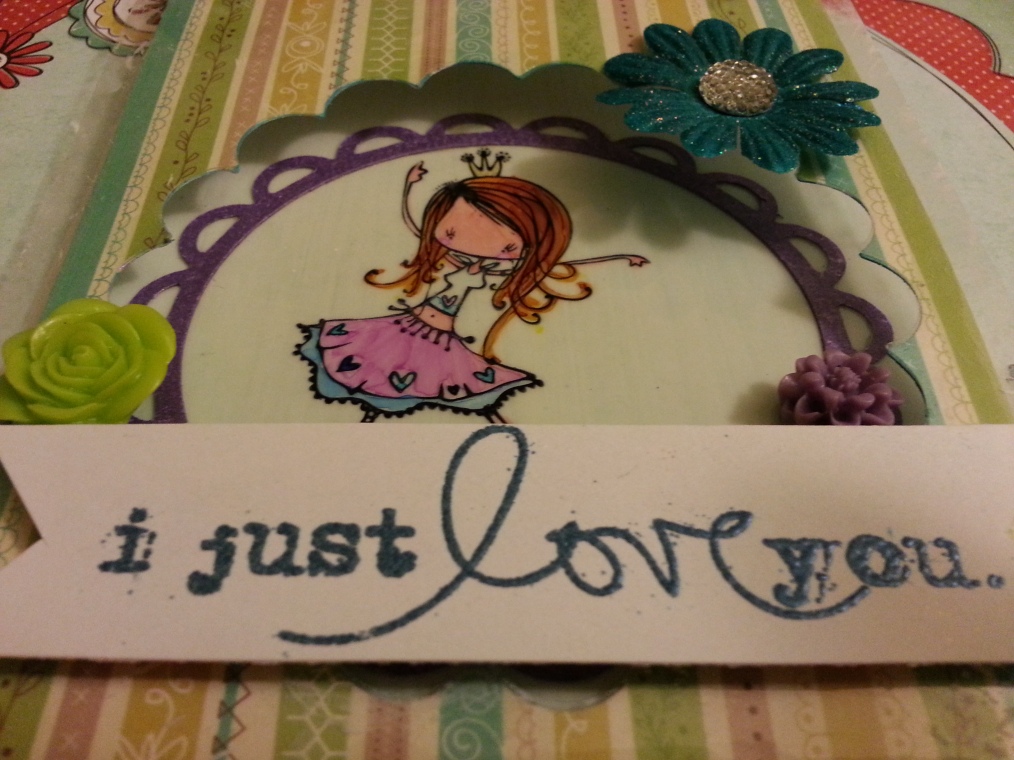